Though it doesn’t seem like it, there was some cooking going on at A Glass of Milk between August and October.  But my posting was a bit *cough, cough* lackluster.

So hold onto your hats as we embark on a whirlwind adventure through recipes I cooked, but never blogged! 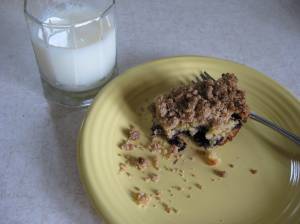 I made the Barefoot Contessa’s Blueberry Crumb Cake.  Do you want to know something?  I’m not crazy about cake.  It’s just not how I want to spend my calories.  Too often, cakes are too dry, too dense, too sugary, ugh, ugh, ugh.  This cake was light, it was moist, it was divine.  The blueberries sank right to the bottom of the cake, but I was not deterred.  Perfect brunch food, perfect snack food, perfect dessert .   This cake is to die for. 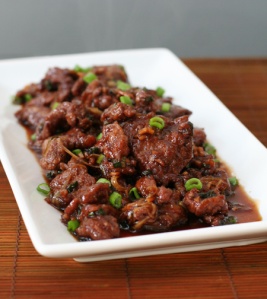 I used ginger for the first time when I made Mongolian Beef.  This is the flavor that I didn’t know I was missing in my Asian cooking.  Delicious!  This picture is Taylor and Lindsay’s.  My picture looks gross. 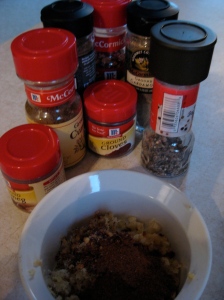 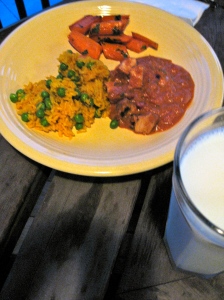 I cranked up my broiler for the first time and made Pastor Ryan’s Chicken Tikka Masala.  After a little online research, I found that there are about 8 million difference recipes, and this one doesn’t look like any other.  But it was great because it was entirely different from anything I’ve ever made.  Served ’em with Ina’s roasted carrots, too. 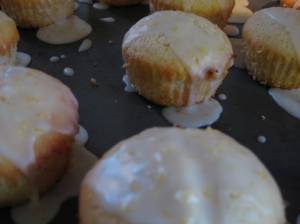 With some plain yogurt leftover, I made another batch of lemon cupcakes, this time with a lemon glaze.  This was what they needed. 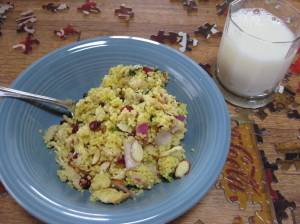 Finally, still left with yogurt, I tackled Ina’s Curried Couscous.  This woman can do no wrong.

I also put together a puzzle.  But I did that with help.

And now you’re up to speed.  Come back tomorrow for soup.