Is there anyone out there who isn’t fascinated by Martha Stewart?  I mean, love her or hate her, doesn’t she at least create a sense of wonder deep within?   Personally, I love her.  I am forever in Martha’s debt, as she taught me how to fold a fitted sheet without just rolling it up in a ball and sitting on it in hopes of flattening it out.  Her talent is limitless.  I saw a segment on one of her old shows in which she made ice sculptures.  Really?  Ice Sculptures?  Does she really do it all?

It should come as no surprise to you that my first recipe from Martha Stewart’s Cupcakes was not Yellow Buttermilk Cupcakes.  I’m sure it’s a classic, but that’s not what I’m after when I look to Martha.  I want something that only she could pull off.   Stout Cupcakes.

Beer is a drink I gladly indulge in on occasion.  And it, just like Martha Stewart, fascinates me.  At least, it does when it’s used as an ingredient in something that is eaten.

But my first foray into beer as ingredient was in cupcake form.  Fitting.

I got my ingredients ready to go, because it’s what I imagine real bakers do. 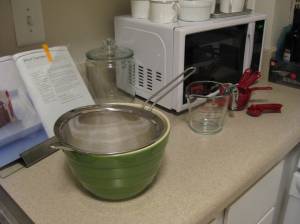 I sifted the first 2 cups of flour because I also imagine they do this, and I think you can taste the difference.  It hit me that Martha might have something to say about sifting.  I flipped to the back of the book and read this…

Sifting = Not worth it.  Thanks a lot Martha.

After mixing the dry (half-sifted) and wet ingredients, and discovering that my oven will hold two dozen cupcakes on one rack (What more could a girl ask for?),

I ended up with these. 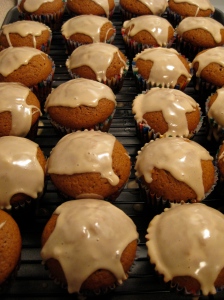 These are, in a word, weird.  They’re cupcakes.  And they taste like beer.  And that’s beyond unexpected, that’s just a little off.  I’m not a Guinness drinker, and perhaps that’s the reason I couldn’t get over the taste.  Maybe it was the pumpkin-pie-ish spices involved.  Maybe it was the ungodly amount of molasses Martha had me use.  Or maybe it’s just that beer and cupcakes are not a winning combination.  I may never know.  Glad I tried it though.

One thought on “These Cupcakes Taste Like Beer [stout cupcakes]”