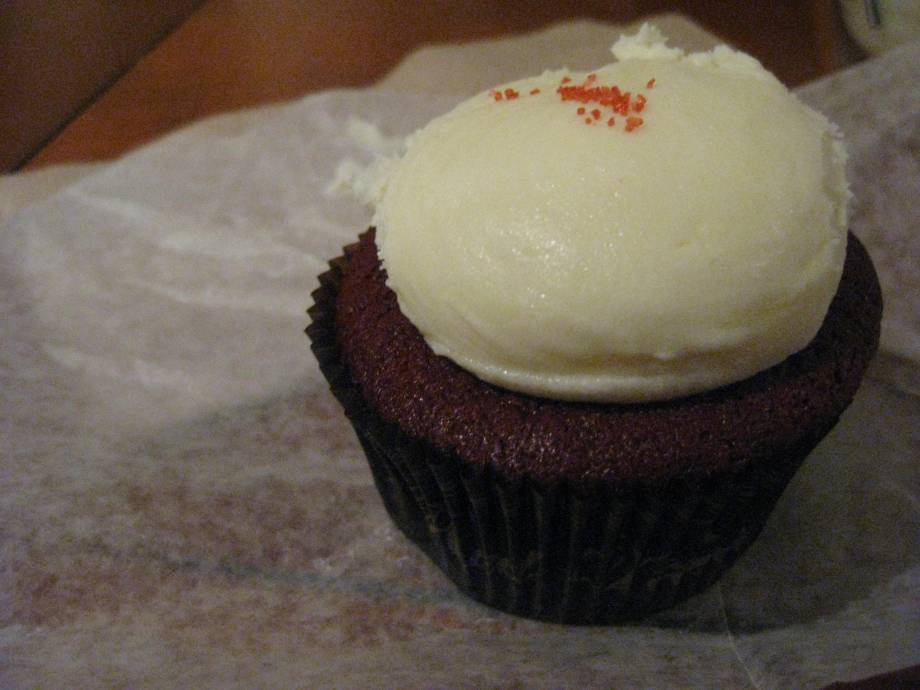 I’ve had too much cream cheese frosting and now vanilla tastes too sweet.  Talk about a real problem!

The good news is that cream cheese frosting is just as easy to make, and can be put on just about any flavor cupcake.

I know, it was ages ago, but I promised I would space out the sweets. 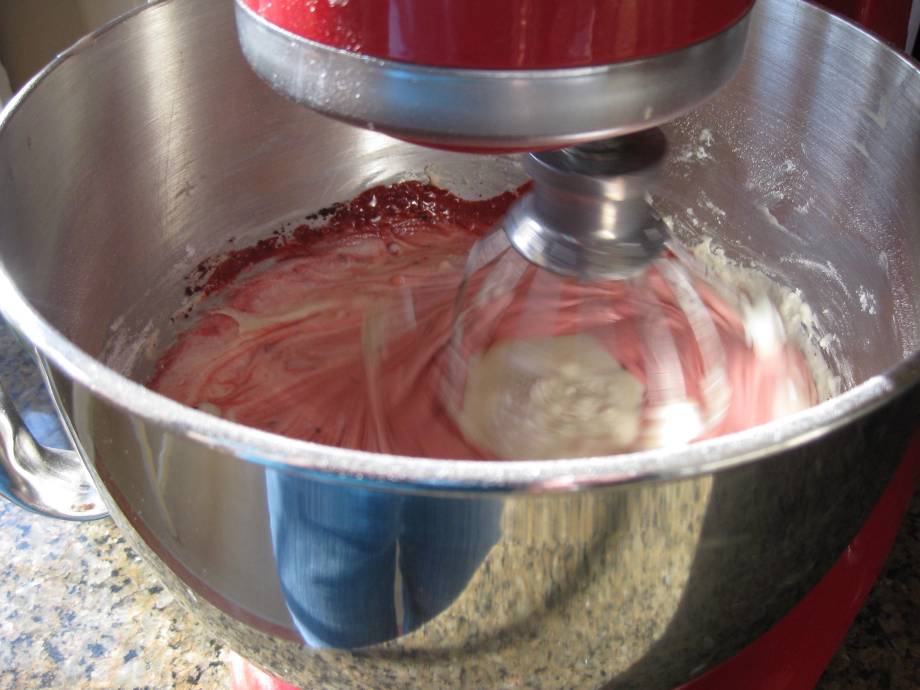 I have found my definitive red velvet cupcake, but for Christmas, I was looking for more.  I wanted a red velvet cake.  One you  might find gracing a table down south.  So I turned to Ree, who never disappoints.  Her red velvet cake was moist and crumbly, and almost delicate.  The texture was different from that of a cupcake, and it felt like we were finally eating the cake you hear people speak of with an affectionate twang.  My family members didn’t seem to have a problem consuming the leftovers for breakfast, lunch and dinner.  To make Ree’s red velvet cake, you will need:

Preheat the oven to 350 and spray two round, 10-inch cake pans with cooking spray (10-inch pans?  I don’t have those!  Fear not, I used 8-inch, and things were still great.).  Blend the shortening and sugar in the bowl of an electric mixer.  A note–I would have reached for my trusty paddle attachment here, as I do when I begin making almost all baked goods.  But the picture in Ree’s cookbook shows the whisk attachment.  So noted.  Once the sugar and shortening are blended till smooth, set aside.  Sift the flour and salt together in a small bowl.  Mix the eggs, buttermilk, vanilla, baking soda, and vinegar in a separate bowl.

Alternate adding the flour mixture and the buttermilk mixture to the shortening mixture in the mixing bowl, mixing after each addition.  My dry/wet additions always go, dry-wet-dry-wet-dry, because one time that’s what Paula Deen taught me on her show.  In a small bowl (I used a ramekin), mix the red food coloring and cocoa powder.  Since I used more powder and less food coloring, I had to even things out with a little (think teaspoonful) milk.  Pour the mixture into the mixing bowl and mix until just combined.

Pour the batter evenly into the two cake pans and bake for 25 minutes, or until a toothpick comes out clean.  Let cool in the pan for 20 minutes (I let cool even longer) before removing the cakes from the pans.  Let cool completely before icing.

For the frosting, which is not Ree’s, but my own recipe:

In a standing mixer fitted with a paddle attachment, combine cream cheese and butter; cream until smooth. Add powdered sugar, beating until light and fluffy. Stir in vanilla.

Frost your cake and enjoy as part of a big fancy meal, or maybe that day’s breakfast.  I won’t judge.

p.s.  Casa glass of milk is going to get a little frosting of it’s own.  I spent a glorious hour in front of the paint samples at Home Depot the other day, and came home with an idea or two, or six thousand. 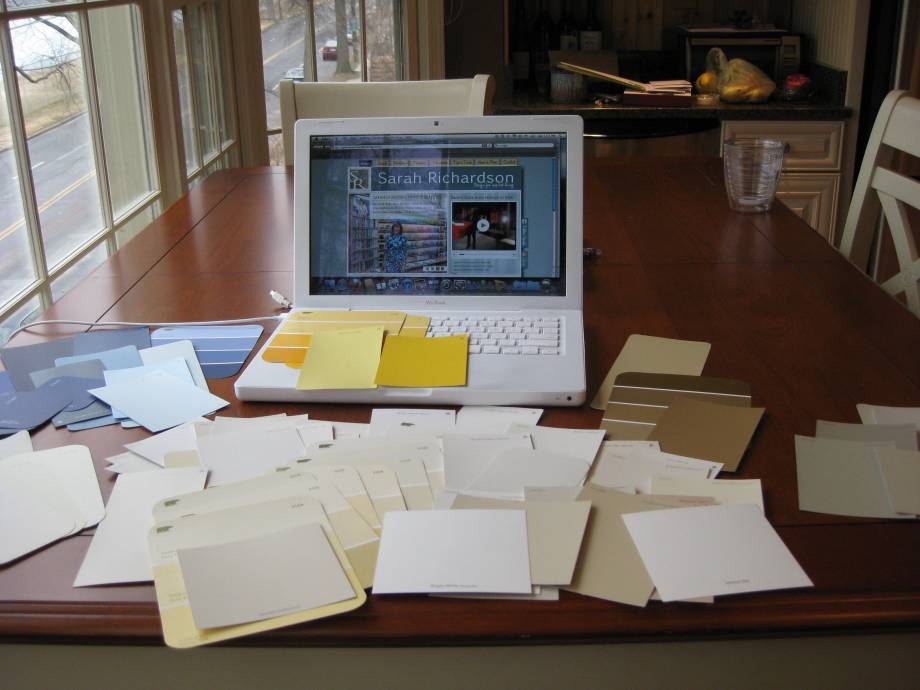 That’s my girl Sarah in the background.  She teaches me to do stuff like this.  If you haven’t seen Sarah’s House on HGTV, you’re missing something good.  My husband can’t necessarily see the differences between colors like natural linen and natural wheat, so I’m the one who gets to make the final decision around here.  There’s one kitchen color I’m rooting for above the others. 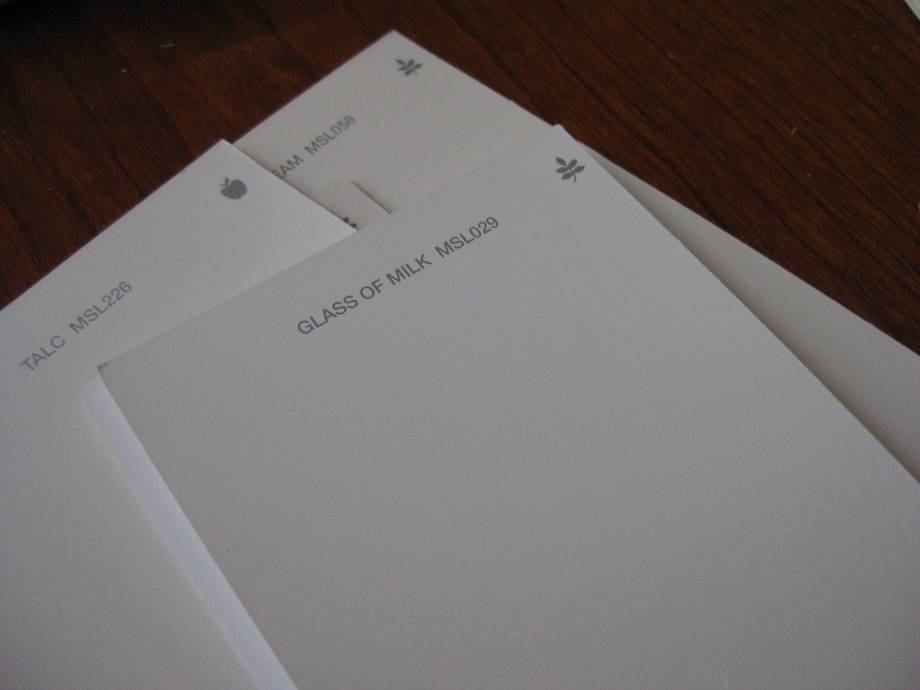