The other day I was chatting with a friend as she cooked dinner, and she mentioned she was following a recipe for pasta e fagiole that was barely a recipe at all.  The recipe (written by another of her friends) told her to throw in a few sprigs of rosemary, and a glug or two of white wine.  She was a little perplexed, but she kept at it, noting she felt like Julia Child, cooking without precise measurements.

We threw in a few impersonations for good measure.

I was taken aback a little by her level of discomfort, though, because she cooks often.  But a lot of people don’t love cooking when they don’t have specific instructions.

Funny though, because when said friend asked me what was on our dinner menu that night, I mentioned we were also having pasta, hold the recipe (Italy, I miss you). 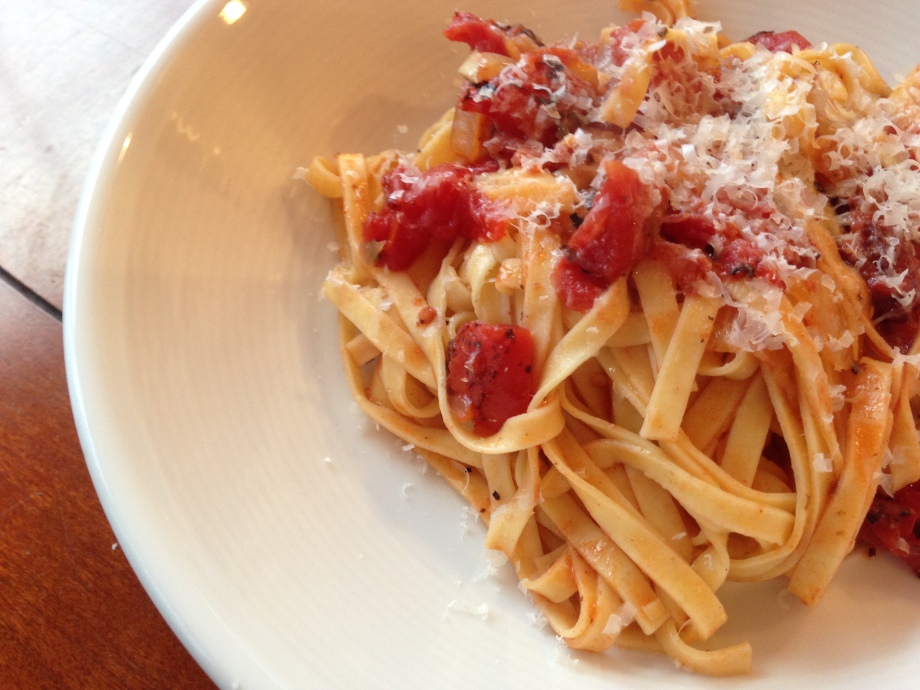 Dear readers, next time you make pasta, try to make it without a recipe.  What do you usually do to sauce your pasta?  Fry up some garlic and add cream?  Let some olive oil sizzle and add tomatoes?  Crack a giant egg on top of your noodles while they’re piping hot?  As long as you’re adding a solid cup of cheese, your dinner is not going to taste bad.

I’m going to tell you how I made Fettuccine all’Amatriciana for dinner, because we’re almost to the point in a post where that happens.  But I didn’t measure anything, so you shouldn’t feel like you need to either.  And if you want to change things up by adding sprigs of something and glugs of something else, I think you should.  Messing around in the kitchen is great fun.

To make Fettucine all’Amatriciana for 4, you will need:

Cook bacon in large skillet till brown and crispy.  When bacon is cooked, add red pepper flakes (a little pinch goes a longer way than you’d think) and black pepper, and stir quickly.  Add onion and cook for a couple of minutes.  Stir in garlic till you can smell that you added it.  Pour in diced tomatoes and their juices.  Bring sauce to a boil, reduce heat to a simmer, and let it bubble on the stove while you bring a large pot of water to a boil.  Add a couple tablespoons of salt to the boiling water, and add pasta.  Cook according to package directions.  Rather than draining, use tongs or a slotted spoon to transfer pasta to skillet.  This will ensure you still have that great, starchy pasta water leftover.  Add about 1/2 C water to the sauce to thin it out a little.  Toss pasta and sauce, and if it still hasn’t thinned enough, add pasta water by the quarter-cupful until you get the consistency you’re looking for.  Drown your dinner with cheese, and serve immediately.

One thought on “Pasta without a Recipe [spaghetti all’amatriciana]”