I’m all about using food to bring people together, and learning from others in the kitchen, and there are a lot of people who get shout outs quite often here at A Glass of Milk.  Dear readers, after two years, I think you should know who they are.  Hopefully, lifting the veil on the cast of characters in my life will help you understand our antics a little better.  Here they are in (rough) order of their appearance on this blog.

My Husband – The one who has to put up with my kitchen adventures more than anyone else, and clearly, the one who can cut loose at a wedding like it’s no one’s business (with a little help from CV back there in yellow).  My husband is the sole griller, dishwasher, vacuumer, and ironer in our house.  He’s also great for lifting the cast iron skillet up to the high cabinet (Now that I think about it, why do I keep it up there?)  Yeah, I’m that lucky.  The drawback?  My husband doesn’t have a sweet tooth.  At all.  Thus, I’m forced to give half of my baked goods to unsuspecting friends and neighbors.  Want to move next door?

Sous Chef Lauren, affectionately known as SCL – Sous Chef Lauren has been here since the beginning.  Of this blog, and pretty much my life.  I walked up to her on the playground in first grade and said, “Guess what?  I’m going to camp with you!”  I have no memory of this.  SCL remembers it all like it was yesterday.  SCL is known for encouraging me to tackle recipes that are more complex than I would attempt on my own, and helping with menial tasks in the kitchen, such as stirring, and artfully arranging food on serving platters.

CV – Perhaps the most frequent commenter on A Glass of Milk, and colleague extraordinaire, CV can also kick it with the kiddos.  Here she is, dancing a mean Soldier Boy with some 13 year olds.  CV welcomes all of my baked goods with open arms and tests my pancake recipes in her own home.  She spends the fall borrowing my ramekins for chicken pot pies, and devotes the rest of her time to boosting my ego by commenting right here. 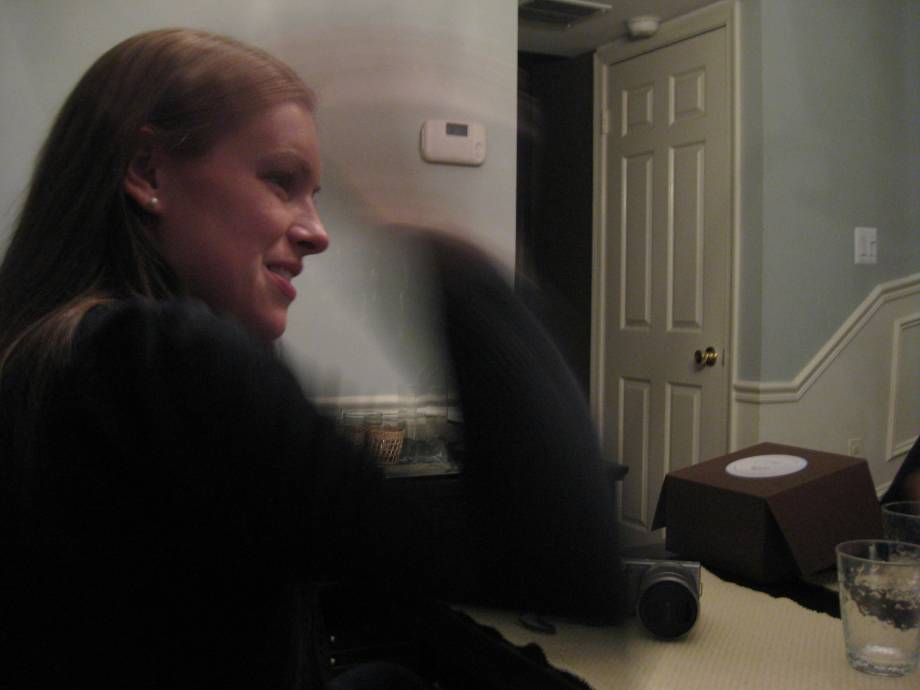 Queen Cupcake – Queen Cupcake and I also go back to first grade, but I didn’t become good friends with her till later in life.  In this photo is everything she loves: nice clothes, pictures, her iStuff (that’s the blur–light-saber app), and cupcakes.   If you listen carefully, you can almost hear her yell, “Yay!”  Queen Cupcake is the one who takes us on cupcake tours through various cities in the U.S.  She’s currently mapping out the west coast, so we don’t see her as much as we’d like.

Cari Faye – Whoa, do you see that blinding light?  It’s Cari Faye’s engagement ring.  I helped pick it out, and she helped pick out mine.  Cari Faye is pretty much the best friend a girl could ask for, even if she can’t make heads or tails of half the utensils in her kitchen.  Cari Faye has an important executive office job, but always finds time to get brunch and watch sports with me.  If you walk by Cari Faye, start humming your favorite 80s tune, and watch what happens.

A Glass of Milk’s Youngest Reader – I like to joke that a glass of milk’s youngest reader is 10 years younger than me, but really, it’s only about 5 (just kidding, AGOMYR!).  AGOMYR enjoys the finer things in life, like  French scarves, high tea at the Mandarin, and Absolut elderflower vodka.  However, as we are great friends, you know she can kick off her latest pair of brown leather boots and pig out on buffalo chicken dip with me too. 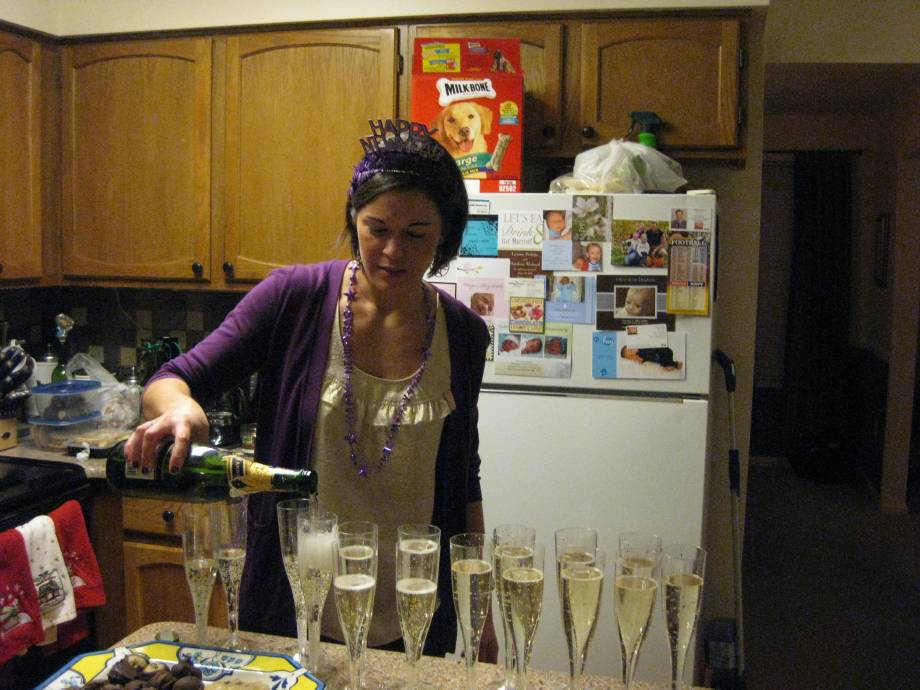 Hey!  It’s Hey Girl Hey!  Hey Girl Hey is our little group’s sommelier, and she can be quite heavy handed when she tops you off.  She can rock a ballet flat like it’s no one’s business, and yes, she is always as put-together as she looks up here.  At first glance, you might think that Hey Girl Hey is one of the nicest people you’ve ever met.  And you would be right.  But deep within, there’s some snark waiting to be uncovered.  I turn to Hey Girl Hey whenever I need to catch up on the latest celebrity gossip, or freak out about books that are better-suited for teenage girls. 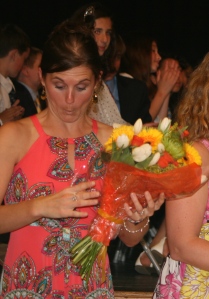 This is The (Not So) New Girl.  Pardon the cropped photo, but this simply had to be the one that defined her.  This is her sense of humor in a nutshell.  She interned with me and CV(D) and promptly thought better of the idea, running away to Cambodia as quickly as she could.  Time passed, and The (Not So) New Girl realized she couldn’t live without us, and is now a full-fledged (read: salaried) member of our team.  The (Not So) New Girl is pretty darn healthy, but we keep her around anyway because she’s funny.  She and Mr. The (Not So) New Girl are watching the blog with eagle eyes this summer in hopes of new recipes.

Wooden Nickels – Wooden Nickels is none other than my mother, and CV’s competition for most frequent commenter.  Wooden Nickels hates cooking, so she hired me as her daughter.  However, this woman does know her cheese.  She makes a mean grilled cheese (known as her WFGCS – world famous grilled cheese sandwich), and the best macaroni and cheese ever.

Brother Bear – Brother Bear has been on the scene since I was 3.  He used to eat almost nothing, then he started eating everything.  Next, Brother Bear ate almost everything except Cheez-Its, and lost a ridiculous amount of weight.  Now he’s back to eating nothing, not out of pickiness, but out of healthiness.  He runs marathons, too.  He is both my favorite, and least favorite brother of all time, which I remind him of often.

Pops – That’s Pops on the floor in yellow.  What’s he doing, you ask?  He’s taking the kickplate off of our beach house kitchen cabinets with his friend Larry.  Is that not something you do everyday?  Then you must not fling your engagement ring across the kitchen like I do.  Nevermind.  Pops hasn’t really made it to the blog yet, but it didn’t feel right not to include him.  He has a couple of dishes he’s quite well-known for, so I’ll have to show them to you sometime. 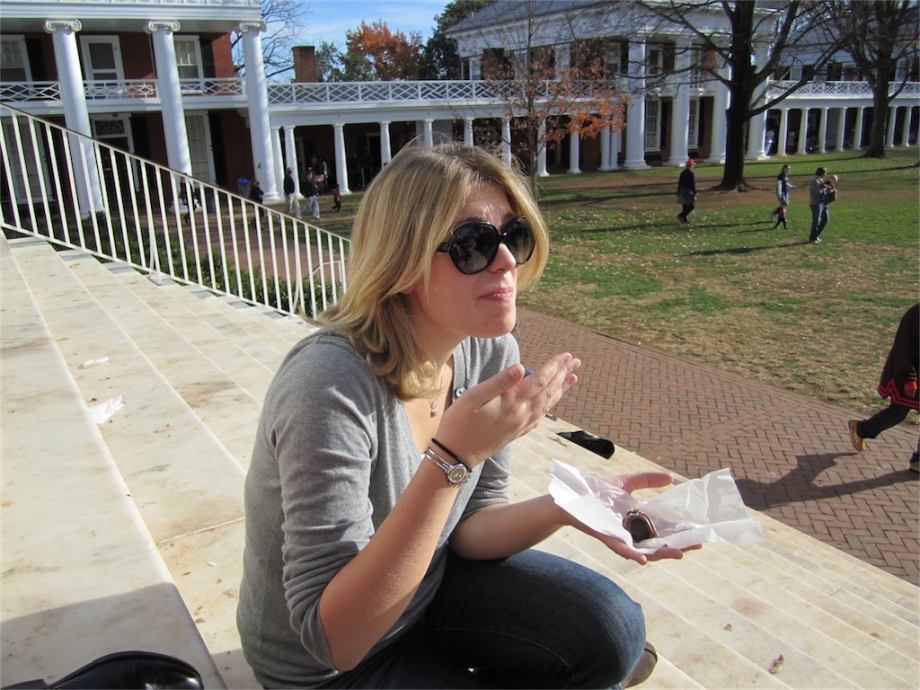 And here I am, sitting on the steps of the Rotunda, at UVA, eating a chocolate truffle with sea salt.  I didn’t go to UVA, Queen Cupcake did.  I went to Maryland.  I was only there to watch the Terps beat the Cavaliers.  I do that a lot.

Now you know the mouths I feed more than any others–my nearest and dearest.  You can put faces to names, and hopefully appreciate all of our craziness a bit more.

17 thoughts on “Meet the Cast”

Search A Glass of Milk